Congratulations to Our Newest Firefighters and EMT's

Each person went through rigorous training and a challenging course load throughout the summer months to attain the certifications.  Family and friends packed the PSTA to honor and cheer on their loved ones as they received recognition for this tremendous achievement.

Videos and photos from the ceremony below. 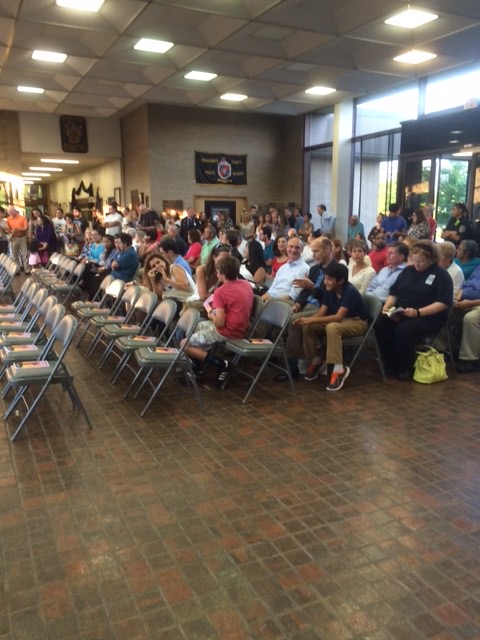 Posted by Anonymous at 5:28 PM No comments:

Congratulations to our partners in public safety on receiving this federal grant to support volunteer fire and rescue recruiting and retention.

Thanks MCVFRA for the many contributions towards making Montgomery County the largest and best resourced combination fire and rescue department in the nation.

Teaching Kids How to Walk Safely

Hard to believe but school starts next week!

If your child walks to school, now would be a good time to review with her/him how to safely walk to school.  The below tips are provided by our partners in safety SafeKids. Posted by Anonymous at 8:49 AM No comments:

Please consider joining Montgomery County Firefighters on Saturday, September 5 to raise money for a great cause while honoring the memory of the firefighters and law enforcement officers who perished at the World Trade Center on 9/11.  Firefighters and police officers are encouraged to do the climb in their gear, and civilians may participate in PT attire.

Note that although the flyer says that registration is closed, registration has been extended so people can still sign up!

You can register here: Registration for 9/11 Memorial Stair Climb

High Rise Fire Fighter Stair Climb
Posted by Anonymous at 7:26 AM No comments:

Just a reminder that our "Ladies Night Out" For Potential Female Firefighter Candidates is tomorrow, Friday, late afternoon/early evening. Please feel free to come by anytime between 4 - 8 pm!

As well, an RSVP can be emailed to Master Firefighter Shantell Brown Posted by Anonymous at 8:31 AM No comments: As mentioned in yesterday's blog post, this weeks themes in the Montgomery County Summer of Safety outreach are smoke alarms and child passenger safety.

One question that pops up often for parents is: how do I select the right car seat for my child?

Wonder no longer as we have the answers in this very informative two-page fact sheet.  Please go here to learn more: Selecting The Right Car Seat
Posted by Anonymous at 8:22 AM No comments:

As part of Montgomery County's Summer of Safety, this week we will be providing information as it relates to smoke alarms and child passenger safety seats.

Speaking of smoke alarms; have you tested your lately?  If not, why not?  Ideally, smoke alarms should be tested at least once a week to ensure they are working.

In addition, if your smoke alarm is 10 years or older it needs to be replaced - regardless of whether it works, or not, when you push the test button.

Posted by Anonymous at 9:14 AM No comments:

This past Friday, August 14 some of you may have gone on our Virtual Ride Along.  Around dinner time, we conducted a live Periscope firehouse cooking segment that was a hit - especially the dish that our host, and fire house chef, Lt. Tim Burns whipped up.

So, we thought it would be a good idea to provide the recipe for this tasty little firehouse dish. Enjoy! 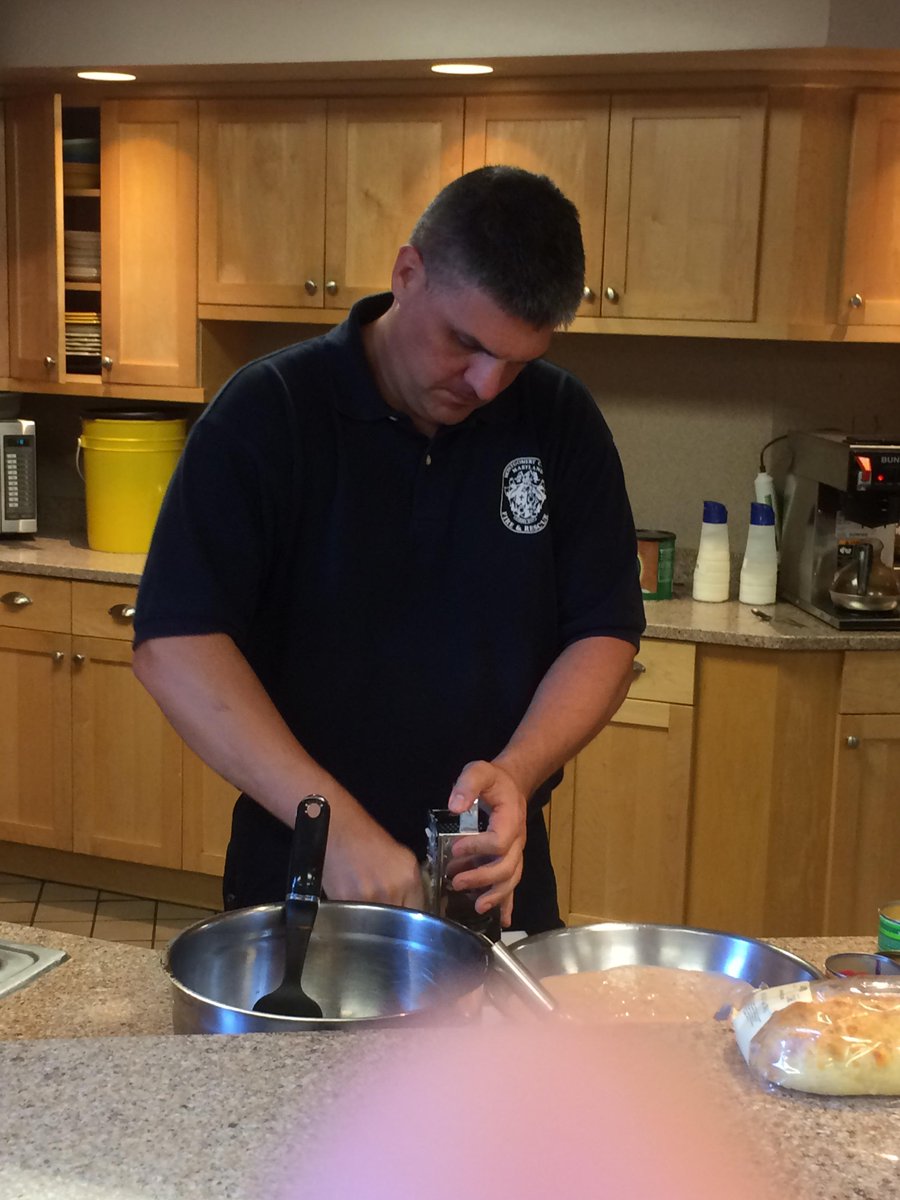 Mix first set of ingredients in large bowl, set aside

Cook chicken over high heat until done and transfer to a clean bowl. let cool.

Posted by Anonymous at 8:13 AM No comments:

We are up and running on our "virtual ride along" today at Fire Station #29.  Please feel free to follow along on Twitter (www.twitter.com/mcfrs) and we will be using the hashtag #mcfrs.

Posted by Anonymous at 10:38 AM No comments:

Posted by Anonymous at 10:59 AM No comments:

Join Us -- Virtual Ride-a-Long This Friday

On Friday, August 14, at approximately 7:00 AM personnel at Fire Station #29 in Germantown will be participating in our latest “Virtual Ride-a-Long“ that will be broadcast via Montgomery County Fire and Rescue (MCFRS)  @MCFRS Twitter Page as well as occasional posts to the MCFRS Facebook Page. The hashtag for this event will be #mcfrs so that all of you can follow along, and engage us, without having to 'follow' or be 'followed' on the particular social platforms.

The purpose behind this initiative is to engage you, the residents we serve, in an innovative way and provide an almost real time view as to what occurs during a “typical” 24-hour shift.  Social media allows us a unique opportunity to bring you, in a “virtual” manner, into “our world.” and allows us to interact with the community.  You will “visit” a fire and rescue station and, where appropriate, be able to observe various 911 responses which highlight the outstanding work Montgomery County firefighters provide on a daily basis.

Lieutenant Tim Burns, with some support from our Office of Public Information and Outreach, will be the lead “tweeter” on this initiative. He will be sending “tweets from the street.”

It must be emphasized that Lieutenant Burn’s primary responsibility will be to his operational obligations and he will not be engaging in tweets/social media of any kind that would distract from the response too, and mitigation of, any emergency situations. Lieutenant Burns anticipates providing public updates until approximately 9:00 PM and will only provide social interaction after that if he feels appropriate.

Posted by Anonymous at 8:49 AM No comments:

Getting ready to go out of town? Holidays and the summer months are not the time to take a vacation from fire safety. Be sure to check your home before leaving to minimize the risk of fire while you are away and review these important safety tips:

If you are staying in a hotel/motel

When you are traveling away from home and staying in a hotel or motel, it is important to know what actions to take in the event of a fire. While hotel fires account for only a small number of fire fatalities, they present a unique fire risk. Fire can spread quickly in hotels and guests are typically in unfamiliar surroundings. While sprinklers, smoke alarms and fire walls are required in many parts of the world, do not assume that all hotels will have the same safety features you may be accustomed to. The more you know in advance about dealing with a fire emergency, the better your chances for survival.

If the alarm does sound:

Every fire is different. While these guidelines may help you survive a fire, there are situations where you will need to do things differently. Taking the time to prepare in advance can save your life.
Posted by Anonymous at 7:15 AM No comments:

Heatstroke - How Hot The Inside Of A Car Can Get

In light of our close call yesterday I thought this would be good to re-post from a few weeks ago. BD

An extremely eye opening video from our friends at SafeKids. Please take 53 seconds to watch!

If you ever see a child alone in a car, please call 911. You could save a life!


Posted by Anonymous at 7:44 AM No comments:

We had a close call today with a child left alone in a hot vehicle.  If you are not aware of it you can go here:

Our partners in safety, SafeKids, has an important related message to share in light of today's event.

Reduce the number of deaths from heatstroke by remembering to ACT.

A: Avoid heatstroke-related injury and death by never leaving your child alone in a car, not even for a minute. And make sure to keep your car locked when you’re not in it so kids don’t get in on their own.

C: Create reminders by putting something in the back of your car next to your child such as a briefcase, a purse or a cell phone that is needed at your final destination. This is especially important if you’re not following your normal routine.

T: Take action. If you see a child alone in a car, call 911. Emergency personnel want you to call. They are trained to respond to these situations. One call could save a life.
Posted by Anonymous at 1:23 PM No comments:

Below are several safety recalls via our partners in safety - Consumer Product Safety Commission (CPSC). Whirlpool Recalls Jenn-Air Wall Ovens Due to Risk of Burns

Avon Recalls Nut Chopper Due to Risk of Injury

Olympus Recalls Digital Point-And-Shoot Camera Due to Shock Hazard; Sold Exclusively at HHGregg Appliance
Posted by Anonymous at 6:52 AM No comments: