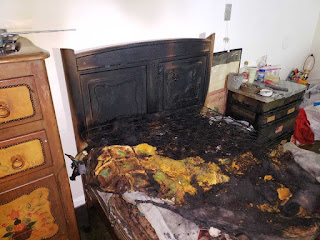 On December 5, 2018 tragedy was averted because of working smoke alarms and a residential sprinkler in an independent senior living facility in the Fairland/Calverton area.  Around 6:45 p.m., units from the Montgomery County Fire and Rescue Service responded to 12801 Old Columbia Pike, Arbor Crest, a two-story, senior independent living facility, for an 'automatic' medical alarm for an unknown emergency.  Paramedic Engine 724 responded to the scene and encountered moderate smoke on the second floor, at which additional fire and rescue units were dispatched. upon further investigation, moments later Firefighters located a small fire in a bedroom. The fire which involved a mattress and some other nearby combustibles was controlled by a residential sprinkler system.  The fire was mostly out. In the meantime, some of the building had been evacuated and other portions were shelter and protect in place. Firefighters located and rescued/relocated a feline (cat) from the apartment of origin. 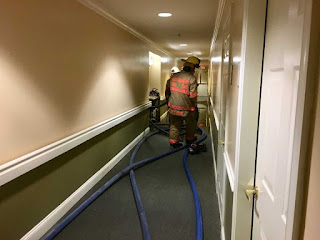 Fire and Explosive Investigators believe one of the residents of the apartment of origin had been consumed alcohol and was smoking cigarettes in the bedroom and at some point fell asleep. Another resident was in another room and heard the smoke alarm activate. Upon investigation and in an effort to check on his wife, he discovered a fire on the mattress by the pillows with his wife still on the bed. He was able to rouse her and then attempted to extinguish the fire, to no avail.  After numerous attempts of trying to put out the fire, both occupants evacuated the apartment. In the commotion of those efforts a medical alarm was somehow activated, automatically alerting 911 for an unknown medical emergency. An ambulance and Paramedic Engine were dispatched. The residential sprinkler activated after the occupants had left the area & prior to arrival of emergency personnel.  The sprinkler essentially controlled and extinguished the fire. There were no injuries associated with the fire.  Damage was estimated to $30,000.

It should be noted, none of the occupants called 911 to report the fire. 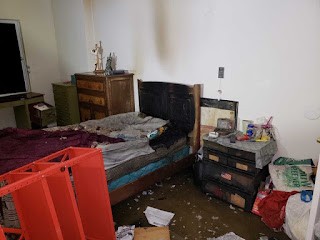 The Community Outreach Senior Program Manager and crews from the area fire/rescue crews (First Battalion) are scheduled to revisit the facility to meet with residents, review best practices and talk about fire safety and reminding residents of the importance of calling 911 in an emergency. 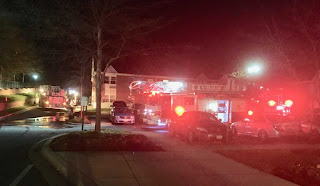 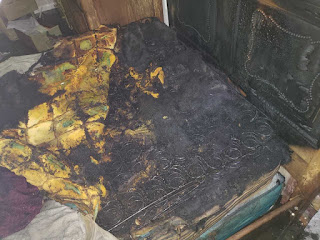 Posted by MCFRS Community Outreach at 7:31 PM No comments: 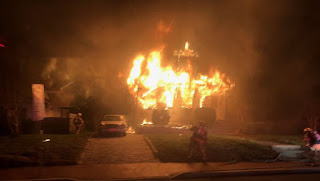 In the early morning of November 21, 2018, units from the Montgomery County Fire and Rescue Service were dispatched to the report of a house on fire in the 4800 block of Western Avenue in Bethesda. Shortly after 1 am several 911 calls were received by Montgomery County & District of Columbia 911 Emergency Communications Centers reporting 'flames coming from house.' Prior to the arrival of fire/rescue units, at least one caller indicated there was a high likelihood that people were still inside.  First arriving Montgomery County Fire and Rescue crews encountered heavy fire conditions and immediately attacked the fire, initially from the exterior and within minutes entered the burning house and located two occupants. Tragically, the two occupants succumbed to their injuries and did not survive. The victims were identified as John Ashton Randolph, age 61, and Inga Randolph, age 94, mother and son, both long-time residents of the Western Avenue home.

John Randolph and Inga Randolph are the first and second residential fire fatalities of the year in Montgomery County, MD.  Last year (2017) there were a total of three (3) residential fire fatalities. Montgomery County Fire and Explosive Investigators believe the fire's origin was on the first floor. There was evidence that the victims were mobile during the fire and may have attempted to fight the fire and then were unable to escape. Fire Investigators located several competent sources of ignition in the area of the fire’s origin, including the possibility of discarded smoking materials, a halogen light fixture -- none of which could initially be eliminated as a 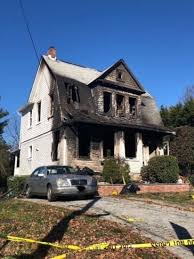 cause. Maryland's Medical Examiner's Office determined the cause of death to be smoke inhalation and thermal injuries.

Fire Investigators reported that there was no evidence of working smoke alarms in the house.  At least one alarm in the basement had a battery that was several years old, while others had no batteries.  Several smoke alarms were found in a box on a shelf just inside the front door --- still in the packaging. Those alarms were dated/manufactured in 2013. Damage is estimated to be over $500,000.

Teams of firefighters from Montgomery County Fire and Rescue Services and the District of Columbia Fire & EMS Department joined forces returned to the scene and conducted an 'After-the-Fire' activity.  Dozens of firefighters canvassed the area, both in Maryland and nearby D.C., checking and installing smoke alarms where needed, talking to residents about fire safety and leaving fire safety information on the door for neighbors to review later.

Smoke alarms that are properly installed and maintained play a vital role in reducing fire deaths and injuries from fire. Every year people across the country are saved from deadly fire situations after being alerted by their smoke alarms. Montgomery County residents are urged to call 311 for information on the department’s FREE Home Safety Check program. Residents who cannot afford smoke alarms or would like to schedule a visit by firefighters to check smoke alarms and ensure they are working and up-to-date are urged to take advantage of the department’s free and popular program. 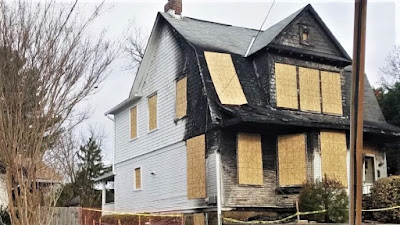 Posted by MCFRS Community Outreach at 7:15 PM No comments: