On Thursday, May 19th at approximately 2:23 p.m., MCFRS units were dispatched for a reported town house fire in the 7800 block of Yankee Harbor Drive in the Montgomery Village area of the county. Units from Laytonville Fire Station 17 arrived on the scene and reported fire showing from the front bedroom of a middle of the row, three story townhouse.

None of the six adult occupants of the townhouse were home. Smoke alarms sounding from inside the townhouse alerted a passerby who called 911.

In addition, firefighters found and rescued a dog that was in the home. Oxygen treatment was administered by personnel to help revive the dog (see photo in album below).

Fire Investigators responded to the scene to determine the cause of the fire. After investigation and interviews, with two occupants that were at home prior to the fire starting, it was determined that the fire was accidental in nature.

Damages were estimated at $150,000.00 to the structure and $20,000.00 to the contents. There were no injuries to civilians or firefighters. A total of six adults and one dog have been displaced as a result of the fire. 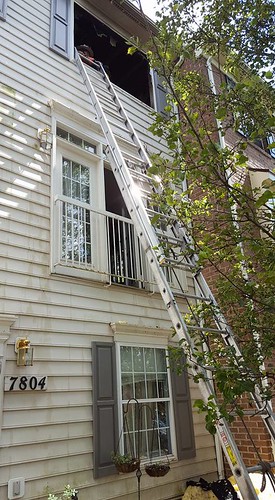 Posted by Anonymous at 8:34 AM