Montgomery County Fire and Rescue officials have released the final investigative report of the Seneca Creek wildland fire which occurred on Saturday, February 19, 2011. The fire began at approximately 9:30 a.m. and burned approximately 500 acres. 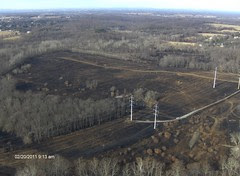 Investigators have determined after careful analysis and examination of the fire scene, conducting numerous interviews with residents and other officials that the fire originated in the area of the 17100 block of Germantown Road. The fire was fanned by strong winds, dry conditions and traveled southeast along the surrounding forested area where it was stopped by fire crews in the Ancient Oaks North subdivision. During the investigation of the fire scene, investigators observed evidence of human activity, including but not limited to, discarded smoking materials, food and drink containers, rubbish, vehicle tire marks including conventional vehicles and four wheel all terrain vehicles (ATV), as well as the remains from tree cutting operations. Due to the large area involved and the amount of fire damage, the exact origin, cause and first material ignited are undetermined.
Montgomery County Fire and Rescue officials would like to remind all county residents that if they see people illegally dumping yard waste or trash of any kind to report it right away to 311.

Remember – See Something, Say Something.