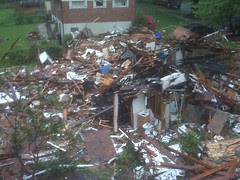 Rockville - - Just before 3 a.m. today, Montgomery County Fire and Rescue was called to the 11200 block of Ashley Drive in Rockville for a report of a house explosion. Units arrived on the scene and found a single family rancher style home that was completely destroyed. Two adult occupants, one male and one female, were located at the rear of the residence under debris and were treated and transported to a local burn center. The adult male remains in serious condition and the female remains in serious condition with life threatening injuries.
Montgomery County Fire and Explosive Investigators report the explosion was caused by an improperly installed natural gas dryer. The explosion caused an estimated $750,000 damage to the structure and two adjacent homes. Debris from the home was distributed in a wide area surrounding the home.