On Monday, May 2, at approximately 12:44 p.m. units from Kensington Fire Station #5 were dispatched for a report of smoke in an apartment unit in the 3300 block of University Boulevard, W. Paramedic Engine 705 arrived on the scene and found an active fire in a terrace level apartment bedroom and quickly requested additional resources.

Firefighters were able to quickly extinguish the fire and contain it to the apartment of origin. Crews made an attempt to evacuate occupants from the building using the local alarm system but were unable too due to a non-functioning alarm system.  Code Compliance was requested and reported to the scene.

Fire Investigators were also requested and conducted an Origin and Cause investigation. The cause was determined to be accidental and electrical in nature.

Approximately 65 firefighters responded to the scene with no injuries reported. A female occupant of another apartment was transported to a local hospital for a checkup. Damages were estimated at $100,000 to the structure and $50,000 to the contents. Several families were also displaced as a result of the fire. 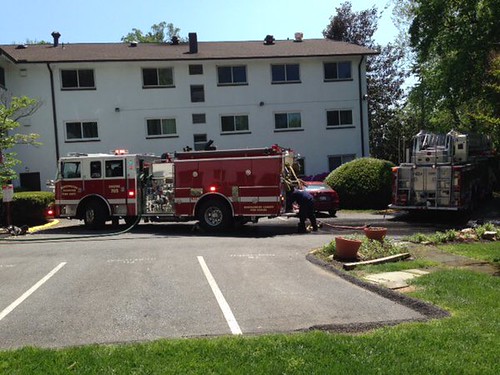 Posted by Anonymous at 8:19 AM