On Friday, July 8 at approximately 12:36 p.m. MCFRS units responded to the 5400 block of Mohican Road in the Glen Echo area of the county for a report of flames coming from a house.  Units arrived on the scene of a one story, single family home with heavy smoke and fire evident from the rear of the home. An RID and Task Force assignment were immediately dispatched.

The crew from PE711 initiated an attack on the bulk of the fire which was throughout the first floor of the home. Limited access and steep terrain in the rear, as well as building construction that included many additions and void spaces made it challenging for firefighters.

Other crews performed a search and rescue of the home to ensure none of the occupants was still inside. It was quickly learned that the family of four was out of town on vacation. A neighbor had called 911 after noticing the smoke and fire.

Firefighters did manage to find and rescue a large turtle that is a family pet.

Over 75 firefighters responded to the scene. There were no civilian injuries while one firefighter did suffer from a heat related illness and treated. 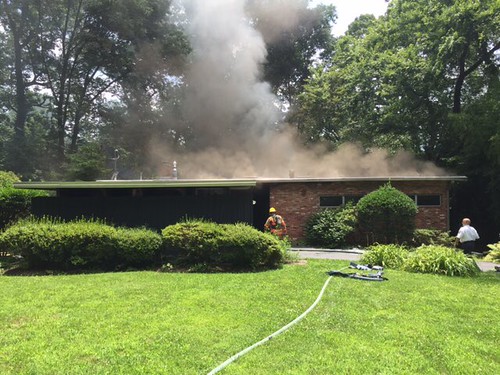 Posted by Anonymous at 8:45 PM