On Thursday, June 30, at approximately 10:20 p.m. MCFRS units were dispatched to the 1100 block of Rosemere Avenue in the Colesville area of the County for a reported house fire. Units from Fire Station #24 arrived on the scene and reported fire showing from the rear basement and first floor areas of a two-story single family home.

All four occupants of the home were safely out, as a smoke alarm alerted them, and firefighters rapidly initiated efforts to extinguish the fire. Firefighters encountered a heavy fire load and hoarding conditions throughout the home which initially presented difficulties in extinguishing the fire. A Rapid Intervention Dispatch (RID), Task Force and Second Alarm were called to assist and a short time later the fire was declared under control. Approximately 85 firefighters were on the scene.

The homeowner indicated he heard what he thought to be the smoke alarm sounding in the basement. He made his way around the outside of the house and opened the basement door to find a fire inside near the laundry room. An effort was made to fight the fire with a fire extinguisher during which the homeowner received a minor injury to his hand.

Fire Investigators were called to the scene to conduct an Origin and Cause investigation. Due to conditions, investigators were hampered though the area of origin was determined to be in the basement. Currently the cause of the fire is undetermined.

There were no injuries to fire and rescue personnel and one minor injury to the homeowner. Damages were estimated to be $200,000.00 to the structure and $75,000.00 to the contents. Two adults and two children have been displaced as a result of the fire. 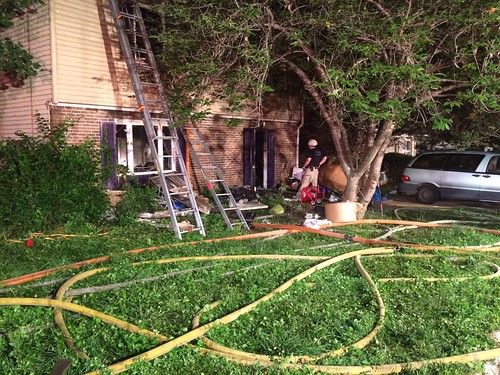 Posted by Anonymous at 7:58 AM