On Wednesday, March 9 at approximately 2:30 p.m., MCFRS units were dispatched to 7 Quantum Place in Gaithersburg for the report of flames coming from the rear of a house. Units arrived on scene and reported that fire was showing from the roof a two story single family home.

At the time of the fire a construction company was performing remodeling work on the first floor of the home.  Around 2:30 p.m. one of the workers smelled smoke and alerted his co-workers who proceeded to check the house. Eventually they made their way to the second floor and found smoke in the master bedroom after which they exited the home.

Fire Investigators were summoned and initiated a cause and origin investigation. It was determined that the fire was electrical in nature, likely associated with a ceiling fan.

During the course of operations, two firefighters sustained minor injuries and were transported to area hospitals for a checkup. Damages were estimated at $200,000.00 to the structure and $50,000.00 to the contents of the home. The family of four and their dogs were displaced as a result. 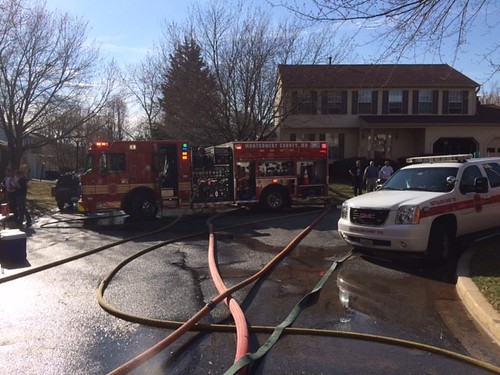 Posted by Anonymous at 8:32 AM