At approximately 1 a.m. on Monday, March 14 MCFRS Units responded to the 19300 block of Churubusco Lane in the Germantown area of Montgomery County. First arriving units reported heavy fire and smoke showing from a middle of the row townhouse.

Firefighters engaged in firefighting operations and initial indications were all occupants of the home were safely out. A short time later, there was a concern that one occupant was missing and perhaps still in the home. Search and rescue operations were quickly initiated.

During the search and rescue operations, a partial collapse of the front of the structure occurred trapping eight firefighters and triggering a “Mayday” alert for all on scene. The “Mayday” was short lived as the firefighters either self-rescued or were quickly assisted to safety.

It was later learned that all occupants had successfully evacuated and were safe.

The fire reached Three Alarms and a total of approximately 120 firefighters were on the scene.

Damage totals are not available at this time but the townhouse will be a total loss. There was also damage to adjoining homes which will result in a total of 20 people being displaced. Red Cross is assisting those displaced. 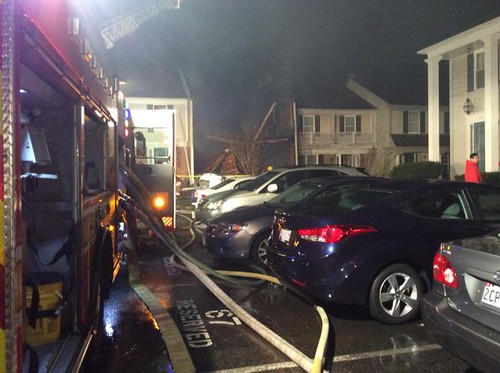 Posted by Anonymous at 3:19 PM