On Thursday, March 10 at approximately 9:05 p.m. MCFRS units responded for a report of a house fire at 18303 Aspen Dale Court in Germantown. Multiple 911 calls were received at the Emergency Communications Center indicating a fire in the garage.

Engine 722 (Germantown/Kingsview) arrived on scene and reported heavy fire coming from the garage of a large two-story, single family home with extension into the attic area and flames in close proximity to a neighboring home. In addition, several cars were on fire in the driveway.

A Task Force assignment was requested by Engine 722 and initial hose lines were placed for an exterior attack and to protect the neighbor’s home. At one point a collapse of the room above the garage occurred along with a brick wall of the garage and portions of the roof. Heavy streams and eventually an interior attack were initiated before the fire was contained.

Family members, five in total, stated that they were in the house when the smoke alarms alerted them to the fire and were able to escape along with their two dogs.

Fire Investigations believe the fire originated in the garage but the exact cause is undetermined at this time. 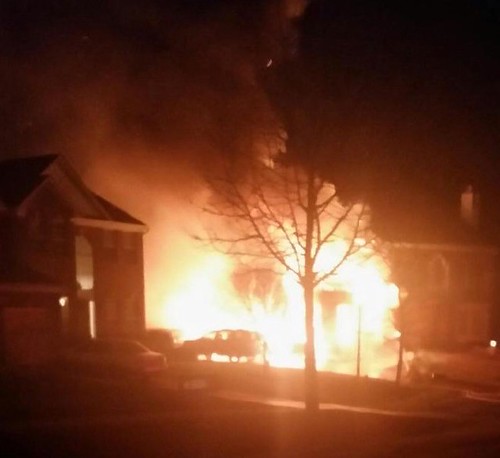 Posted by Anonymous at 8:10 AM