Townhouse Fire in the 9900 Block of Brookridge Court

At approximately 6:15 AM on Thursday, February 18, MCFRS firefighters were dispatched to a report of a townhouse fire in the 9900 block of Brookridge Court in Montgomery Village. There were multiple 911 calls to the Montgomery County Emergency Communications Center reporting the fire.

Units responding reported heavy smoke in the air approaching the area. Firefighters arrived on scene and found heavy fire evident in a middle of the row townhouse on the first and second floors. Additional units were quickly requested to assist.


In addition, firefighters encountered an adult female (resident) outside upon arrival. She was evaluated and eventually transported to a local hospital for a checkup.

The fire was quickly brought under control and contained to the townhouse of origin. Firefighters also encountered a frozen fire hydrant, snow piles blocking fire lanes and icy conditions. Approximately 75 firefighters responded to the scene.

Initial investigation determined that the area of origin may be a couch on the first floor in the living room. Smoke alarms did activate however investigators believe the townhouse was unoccupied at the time of fire. Investigation is ongoing at this time and the source of the fire is currently undetermined.

Damage is estimated at approximately $225,000.00. Red Cross was requested and is currently assisting a neighbor. Video and photos below. 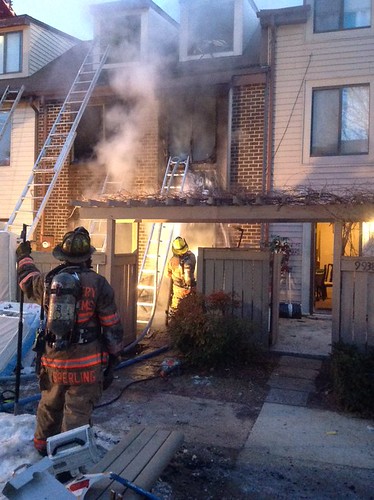