A little before 7 p.m. on Saturday, February 27 MCFRS Units were dispatched for a report of a motor vehicle collision with entrapment at the intersection of River Road and Pyle Drive, in Bethesda. First arriving units found a two vehicle collision, one of which was off the roadway in a ditch, with several people trapped in one vehicle.

Several others were injured including passerby good Samaritans who were injured attempting a rescue prior to MCFRS arrival. Initially there were at least 5 injuries.

An EMS task force was quickly requested and responded to the scene. This brought a total of 12 fire and rescue units to the scene.

The Montgomery County Police Collision Reconstruction Unit was called to the scene to conduct an investigation.

Photos from the scene below. Montgomery County Police have put out a Press Release with an update: Fatal Collision on River Road Investigated 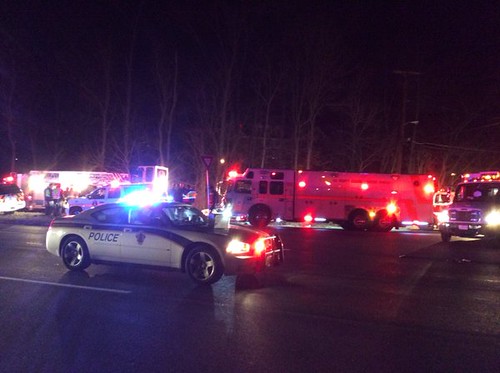 Posted by Anonymous at 9:03 AM