Last night, February 24, a little after 8 pm MCFRS units responded to 909 McCeney Avenue for the report of smoke filling the garage. Units arrived on the scene to find a two story single family home with fire showing in the garage and extending up into the first floor and attic area.

The occupants, a husband and wife, were home at the time of the fire and escaped. Initially, the wife first noticed what she thought was steam coming from one side of the garage. She then alerted her husband who looked out another window in the home and observed fire coming from the garage.
Both evacuated the home and dialed 911 once safely outside.

Firefighters encountered heavy fire and significant extension as they went to work to extinguish the fire. It took firefighters a little over 30 minutes to bring the fire under control. Approximately 65 firefighters were on scene.

Fire Investigators conducted a cause and origin exam in the garage. Many combustible items were found in the garage as well as two vehicles. A cause of the fire could not be determined as both vehicles and the contents of the garage were severely damaged. The fire is listed as undetermined.

There were no injuries reported to fire and rescue personnel or civilians. Smoke Alarms were present and did activate. Damages were estimated to be:

The two occupants of the home were displaced and are currently staying with a neighbor. Firefighters will be returning to the neighborhood around 3 pm today (February 25) to go door to door (After the Fire Outreach) offering to check smoke alarms and provide safety tips for interested residents.

Photos and videos below. 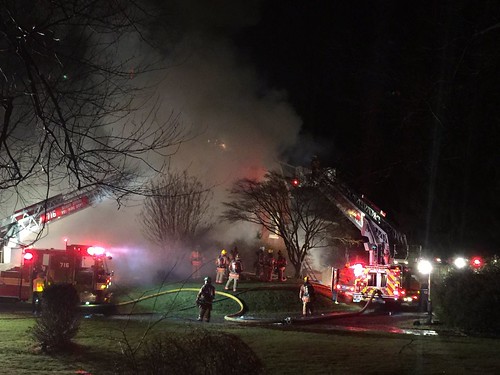 Posted by Anonymous at 8:21 AM